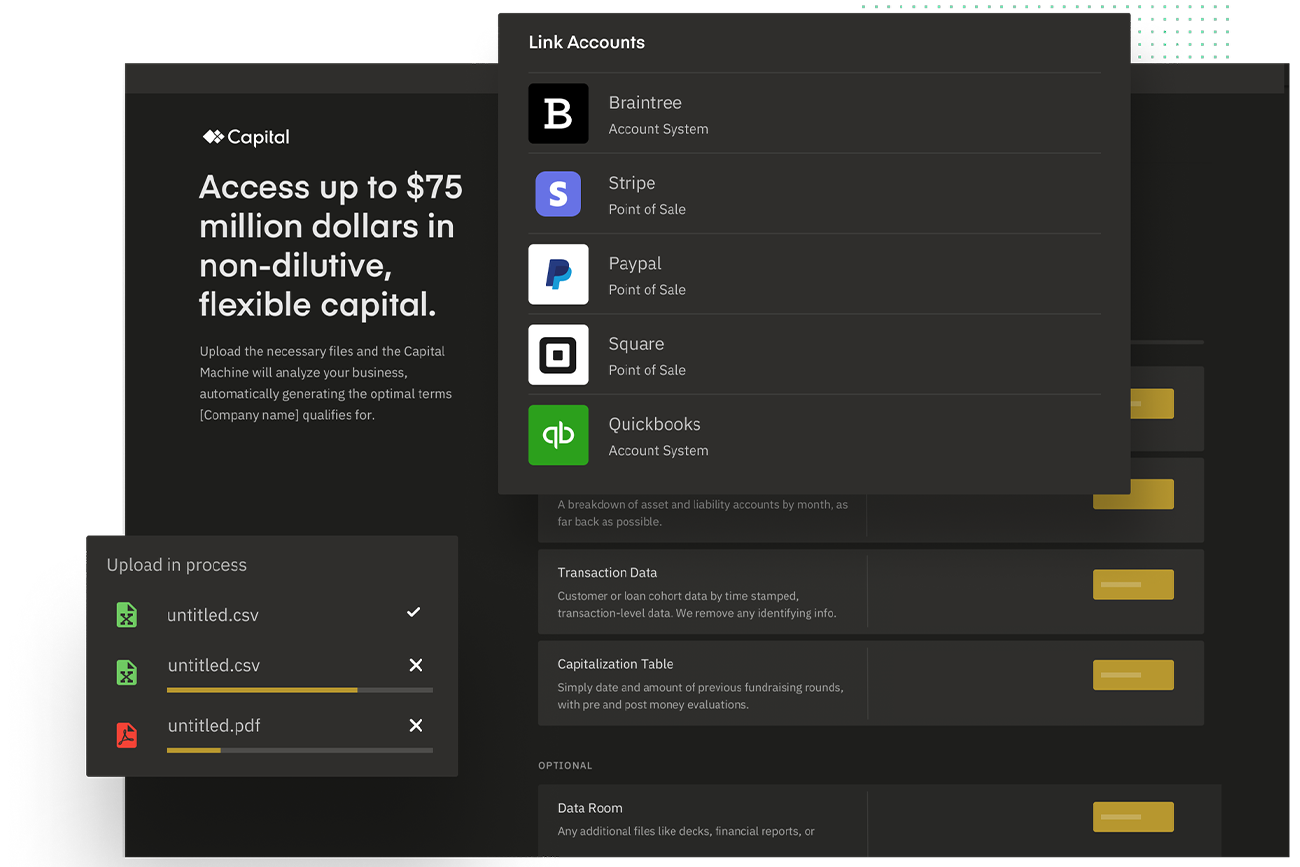 Capital is revolutionizing the fundraising process, to help ambitious companies get funded in a more transparent and efficient way and ultimately to raise the ceiling on economic efficiency. They are disrupting traditional fundraising methods to ensure that companies can efficiently scale through their unique tools, insights and funding.

Capital uses a proprietary technology platform (The Capital Machine) and the power of AI to evaluate financial data from an unbiased vantage point and deliver sophisticated financial analysis. The Capital Machine is already powering fundraising for a network of businesses with aggregate annual sales of over $3 billion. It is used to ingest gigabytes of complex company data in minutes, yielding a transparent, bench marked and predictable view of fundraising that is 100x more efficient than the existing process replying on human analysts, outside auditors, and spreadsheets.

Capital is the leader of the emerging category of “capital as a service” (CAAS), driving smart resource allocation, and helping business owners uncover opportunities for greater success.

Blair is the CEO of Capital. Before founding Capital, Blair was a principal investor at Draper Fisher Jurvetson where he sourced and managed venture investments for the firm focusing primarily on software-as-a-service and artificial intelligence during his four-year residency. Blair graduated from Stanford University where he studied product design and mechanical engineering.

Csaba is the President of Capital. As a VC, he has invested in 4 unicorns: Truecar, Scopely, Trax, and Clutter. He has also been an early backer of 10+ other successful tech companies. Between 1997 and 2012, Csaba built 3 successful HFs. His last fund managed over $2bn. Csaba was born in Hungary. Since then he has lived and worked in Budapest, Moscow, Geneva, London, New York, Miami, Singapore and Los Angeles, where he currently resides with his wife and three children.

Christopher is the CTO of Capital. He graduated from Stanford University with a degree in Electrical Engineering in 2011, and went on to work for iControl Networks as a PM Intern. Capital is not his only company that he founded: in 2011, Christopher founded TutorCloud, before working as a Teammate for ClassDojo, a role in which he stayed for close to 6 years.