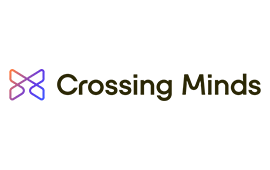 Crossing Minds is creating a universal recommendation platform that can be integrated into your business with minimal effort.
Believing that recommendation and personalization are simple ways to increase sales by making product suggestions to customers based on historical behavior, customers can use the platform to integrate tailored sections into both their websites and emails. This could be in the form of “For You” suggestions directly on the front page, or even emails which appear to “know” the recipient, what they have done previously and what they are likely to engage with in the future.
The results are tangible: according to current users, Crossing Minds’ software increases sales on average by 96%, CTR by 129%, and produces a Top Sales Increase of 697%.
Yet, privacy is at the heart of the company’s values. Their advanced algorithm makes smart and accurate recommendations based on on-site actions alone – no invasion of privacy or use of personal data. Businesses can always stay compliant with consumer privacy laws while using the solution.

Crossing Minds was founded in San Francisco in 2016 by Alexandre Robicquet, Dr. Emile Contal and Pr Sebastian Thrun.
Alexandre Robicquet is Co-Founder and CEO. He started out completing a Master’s in Mathematics at ENS in Paris, and another in Computer Science at Stanford University. Clearly, he was smitten by the place, as he stayed there for an extra two years as a Graduate Research Assistant, working on Artificial Intelligence projects. Having gained his third Master’s degree in Artificial Intelligence, he considered completing his PhD, but chose instead to work on building Crossing Minds and Hai full-time.
Emile Contal is Co-Founder and CTO. Having completed a PhD in Statistical Learning from ENS Paris-Saclay, he went on to write over many publications, and produce research witnessed by numerous citations from prestigious conferences on Machine Learning and many other scientific and technical industries. The algorithms he invented are now implemented in several software libraries used by thousands.
Sebastian Thrun is Co-Founder. He was a Stanford Professor, who previously completed a PhD in Computer Science and Statistics at the University of Bonn, going on to found many startups including Udacity and KittyHawk. He even founded Google’s self-driving car team and Google X, where he helped create Google Glass. He now leads Crossing Minds’ research in AI and Human-Computer Interaction.
< Back Home