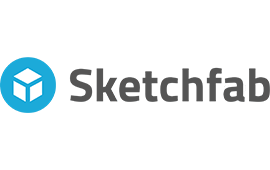 Sketchfab is a platform that allows creators to host 3D content and make it available for sale and download to others. The online library features 3D content and models created on a variety of different platforms, including content that was created with immersive VR creation tools such as Tilt Brush, Oculus Quill and others.

The company was founded on the idea that both the creation and consumption of 3D content will become an ever-increasing part of our digital lives.

With a community of millions of creators who have published millions of models, Sketchfab is the largest platform for immersive and interactive 3D. Their store lets buyers and sellers transact 3D models with confidence using a realtime viewer and model inspector. Their technology is integrated with every major 3D creation tool and publishing platform, and is compatible across every browser, operating system, desktop and mobile. They also support VR and AR on compatible hardware. They robust APIs let developers support direct uploading and downloading of 3D models; and configure their embeddable 3D viewer as needed.

In July 2021, Sketchfab was acquired by Epic Games.

Sketchfab was founded in Paris in early 2012 out of a frustration of seeing so many 3D creators spending hours on making 3D models, but ending up sharing boring screenshots as there was no better solution to showcase their work.

Alban Denoyel, prior to founding Sketchfab, launched a low cost web agency, and worked for 4 years in the 2D world of photojournalists. He graduated from ESSEC Business School in Paris.

Pierre-Antoine Passet formerly occupied roles as co-founder and CTO at Reedian, CTO at Podcast (Digital Mammouth SAS) and was a Management Consultant where he worked for major clients in several industries, mainly on organizational issues. He graduated from both engineering and business degrees.