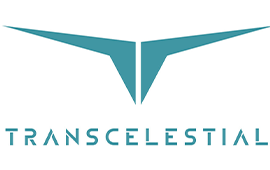 Transcelestial is a company building the technology for superfast global Internet distribution. It has mass-produced a wireless network technology that leverages its proprietary Wireless Laser Communication Technology to create a wireless distribution network between buildings, traditional cell towers, street-level poles and other physical infrastructure - with a much lower total cost of operation than fiber for Mobile Network Operators, Internet Service Providers and enterprises.

In the longer-term, Transcelestial aims to develop a constellation of small satellites positioned in low Earth orbit, allowing their laser network to not only beam across cities but upwards to connect continents across the world too.

Transcelestial has won numerous industry and global awards such as SPIFFY San Andreas Award for Most Disruptive Technology by Telecom Council, Forbes 30 Under 30 to our CTO Dr. Mohammad Danesh, Edge 35 Under 35 to our CEO Rohit Jha, The Most Ambitious Start-Up in Photonics Award by The Optical Society (OSA), etc.

Transcelestial was founded in 2016 by Rohit Jha and Mohammad Danesh.

Rohit Jha is the CEO & Co-Founder of Transcelestial, a startup building light speed communications infrastructure for the next 100 years. He graduated with a degree in Electrical and Electronic Engineering from Nanyang Technological University, Singapore. There he worked on cutting-edge projects like NTU’s Solar Car, a state-of-the-art Healthcare Droid, next-gen multi-touch HCI systems and represented Singapore in international engineering competitions. Subsequently, he worked for 4 years in The Royal Bank of Scotland’s FX Electronic Markets Team where he received multiple awards in security, low-latency communication systems and highly scalable distributed software systems thus becoming the youngest Associate in the company's Asia-Pacific history.

Dr. Mohammad Danesh is the CTO & Co-Founder of Transcelestial, a startup building light speed communications infrastructure for the next 100 years. He has a PhD in Nanophotonics from the National University of Singapore and 10 years of experience with electromagnetics and optics. His research in Graphene Plasmonics enabled manipulation of light & matter interaction on a nanoscale level. He has designed and built RF & Microwave systems, advanced optical test and measurement apparatuses for A*STAR (Singapore), Sumitomo Electric Labs (Japan) and FUNSOM Institute (China). He has over 10 publications in top Photonics journals including Nature and built a mobile phone, from ground up, when he was in college.