This year, it was always going to be a different story. After years of groundbreaking records, the African Tech Ecosystem is now going through the global pandemic and the multifaceted crisis it has generated. So surely this year, we’re looking at a different story?

As we compiled this report, what came out remained the story of the fastest growing VC market; with activity growing by almost half, attracting a higher number of unique investors. More of them are investing more frequently and betting long-term on how tech is transforming this region and creating value.

In some respects, there was a slowdown as Investors’ processes were disrupted, as founders delayed rounds for better times, as betting big tickets became harder.

But a few months into the crisis, it’s become clear that not only is the ecosystem resilient, but it is even getting a boost from an accelerated digitalization of some key economic sectors.

Even better, we saw a trio of high profile exits (Paystack, DPO, Sendwave) begin to provide positive responses to questions of value creation and outcome for founders and investors.

We do look forward to seeing these turn out to be the first chapters in a story of exits that could be, as everything has been in this ecosystem so far, far beyond our expectations.

We report on tech & digital VC equity deals above US$ 200K, in African startups.

Our methodology has remained unchanged since our fi rst report. Below is the recap of the fundamentals:

1 . Our numbers are about equity deals.
This means we are excluding everything else: grants, awards, prizes, conventional debt, venture debt, loans, Initial Coin Offering (ICO), non-equity/technical assistance, post-IPO and M&A deals.
Examples: Twiga Foods US$ 29.4M debt from IFC announced in October 2020 is not counted.
Lumos Global’s debt round of US$ 45M from DFC announced in September 2020 is also not counted.

2 . Our numbers only include equity funding rounds higher than US$ 200k.
This includes deals that we categorize as Late Seed (Seed+) to Growth stage equity rounds.
Angel deals and smaller Seed deals below US$ 200K (numerous on the continent) are omitted voluntarily.
Example: Credit startup Swipe’s round of US$ 120K funding from YC as part of the W20 batch in March 20, is not counted.

3 . We focus solely on VC deals that are in the tech & digital spaces.
This means we only count companies where the value is built around digital technology.
Example: In May 2020, the Series A of US$ 11.2M of Insect-based feed and fertilizers company, NextProtein, was not counted.

4 . We only cover African start-ups that we define as companies with their primary market, in terms of operations and/or revenues, in Africa but not based on HQ or incorporation.
When this company evolves to go global, we will still count it as an African company.
Example: Gro Intelligence’s US$ 85M Series B round is counted as an African deal, as it was founded in Kenya before expanding to the USA.

We categorize deals into three degrees of disclosure:

- Fully disclosed: these rounds are announced publicly or at least on professional platforms such as CrunchBase, Tracxn, etc. But also, the major details of the round (Series, round size, investors) are also disclosed. Everybody should be able to track these deals through public sources.

- Partially disclosed: the existence of the rounds is disclosed but major details, especially round size, are not public. Investors are often disclosed in this case. In this instance, we complete the information by reaching out to entrepreneurs and investors, committing on confidentiality, in exchange for the ability to include it on the aggregates and provide a more accurate picture.

- Confidential: these deals are not disclosed anywhere in press or platforms. We collect this data through direct engagement with investors and founders, again committing on confidentiality.

The data show a mitigated drop in disclosure in 2020.

This second data point mitigates the above. Founders and investors chose to disclose the existence of the rounds but kept the details - such as round size - confi dential. This may be due to the fact that, in the context of the global crisis, rounds were often smaller and, in many cases, turned into bridge rounds to extend runways before going for a full fundraising.

- Confidential: at the end of the day, only 12% of rounds were kept entirely confidential: certainly higher than the 6% in 2019 but still keeping 88% of rounds somewhat disclosed. 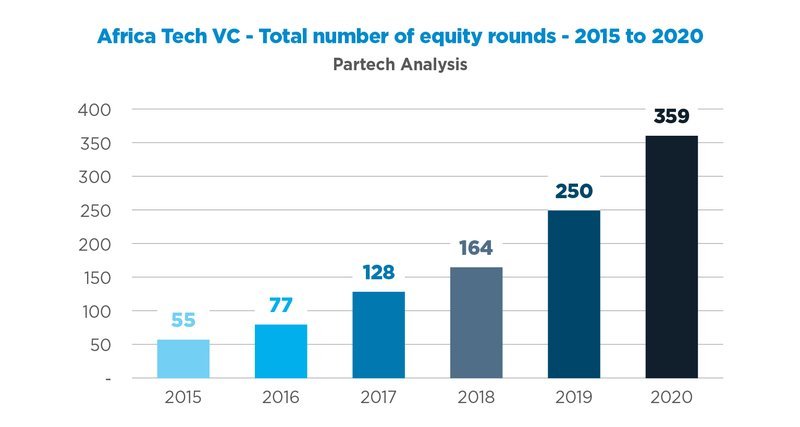 This is quite remarkable. In such a challenging year, more startups have closed rounds than in any previous year. Activity has grown by almost half. No other region in the world has seen anything like this. The global interest for the African tech ecosystem remains strong even in the context of the global crisis driven by the pandemic.

Complete the form at the top of the page to download the report as a PDF.