Novasparks completes its coverage of the US equity projected markets 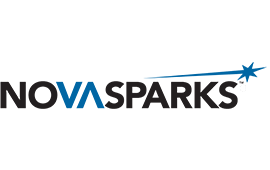 NovaSparks is the leader in ultra-low latency trading solutions for the financial trading industry. Their unique FPGA centric approach delivers market data with a sub microsecond processing latency including order book building, even during market peak periods. Available for 70 feeds across the major Equity, Futures and Options venues in North America, Europe and Asia, the feed handlers are packaged in easy to deploy appliances offering an extensive fan-out capability for market data distribution. Feed Handlers can also be deployed in a standalone PCIe card that can be installed in any trading server. This PCIe Card is the basic block of the NovaSparks open FPGA development platform, used for designing custom products such as normalized market data converters, ETF calculators, trading strategies execution, order injectors, risk checks, etc.
Founded in 2008 and backed by well-established investors, NovaSparks’ offices are located in Paris, France and New York, USA.
In July 2020, Novasparks was acquired by Peninsular Capital, an independent investment firm, in a Management Buy-Out transaction.

The company was founded in 2008 by Luc Burgun, CEO, and Jean-Eric Finck, CFO.

Luc Burgun is a successful executive and entrepreneur with 25 years of experience in the electronics industry. Prior to joining NovaSparks, Luc was VP Engineering at Synopsys. Before that, he was CEO and President of the board for EVE, the leader in standard FPGA-based emulator, which he co-founded in 2000 and sold to Synopsys in 2012. From 2007 to 2011, Luc was also President of the supervisory board of Cofluent, a leader in system level specification acquired by Intel in 2011. Prior to EVE, Luc was managing the emulation engineering team at Mentor Graphics. He has published numerous articles at international technical conferences and has been granted six patents. Luc Burgun holds a Ph.D degree in Computer Science from the University of Pierre and Marie Curie, Paris VI.