Alan, a legendary company in the making

Every iconic company has a legend about how it started. Some were born in a garage, some were prototyped in a dorm, some were planned while waiting for a cab that never came, etc.
Alan started from the kitchen table of Jean-Charles Samuelian-Werve and Charles Gorintin.
That’s where our first Boards happened for the first 6 months before they could afford a proper office, and no offense to JC and Charles, that kitchen was everything but legendary ☺.

Today, as Alan announces the closing of a €185M round at a €1.4B post-money valuation, right upon celebrating its 5th year anniversary, it is a perfect time to look back and reflect on the unique company  Alan has become, and on what lies ahead. 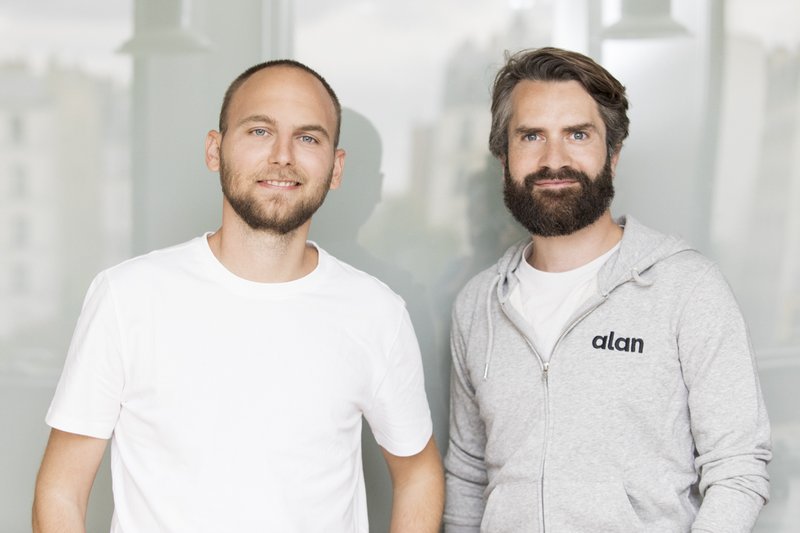 It is a great privilege in the life of a VC to witness, from Day 1, the inception of a Unicorn and to experience its journey from the inside. In the case of Alan, it has also transformed me as an investor, and I am fortunate that this happened early on in my VC career and allowed me to completely change my perception of the Seed Investment game.

I first met Jean-Charles when he pitched us a Series A round for Expliseat, his previous company where he had already accomplished the “impossible”: produce a carbon-fiber aircraft seat 50% lighter and cheaper than every other competitor (mostly billion-dollar incumbents) and get it certified in an industry that is notorious for being one of the most regulated in the world. As Partech is not really into such industrial investments, we passed on the opportunity but we saw the kind of fire and the determination in Jean-Charles’ eyes that makes you instantly regret your decision …or at least swear that you will back him when he launches his next venture.
Fortunately, this didn’t take long.
2 years later, I got a phone call from our friend Brent Hoberman (man, I do owe you a 3-star Michelin dinner on this one) who said: “Are you aware that JC is starting a new company?”.
The following day, I was sitting with JC in our Paris office.
This was no pitch.
Just a coffee with the same incredible Entrepreneur I had met, determined to go after another heavily regulated industry: healthcare.
At Partech, we make the majority of our Seed investments at a pre-launch phase. That means you don’t have a lot of proof points or data to look at. It’s mostly a bet on the Founder-Market fit and the size/timing of the opportunity. But this was as extreme as it can get: the pre-seed round was closing in a few days and JC didn’t want any VC on his cap table.
The list of reasons why not to do the deal was impossibly long and hard to argue against:
- No product and no traction
- No pitch deck
- None of the Founders have experience in Healthcare or Insurance
- It will take very long and will require a lot of funding to get a full insurer license (to comply with regulatory capital requirements)
- And even with time and money, can they succeed in a heavily regulated market (France) against billion-dollar giants that have owned the market for decades and where customers are locked for 12-month periods with automatic renewal??
To make our decision, we just had a 10-page document where JC and Charles laid out their vision. Here are the first 2 pages: 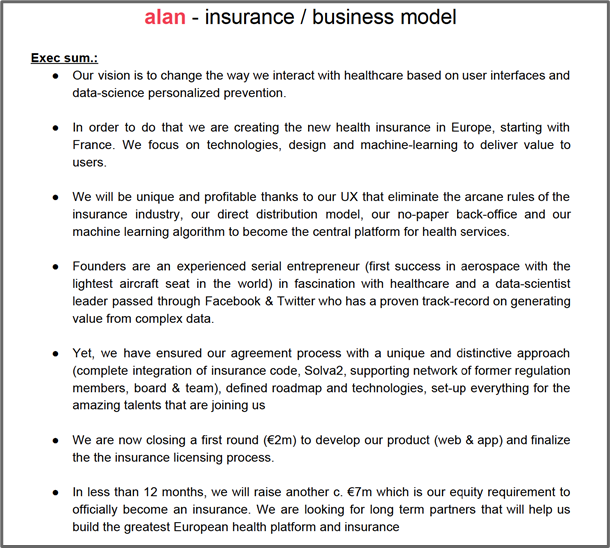 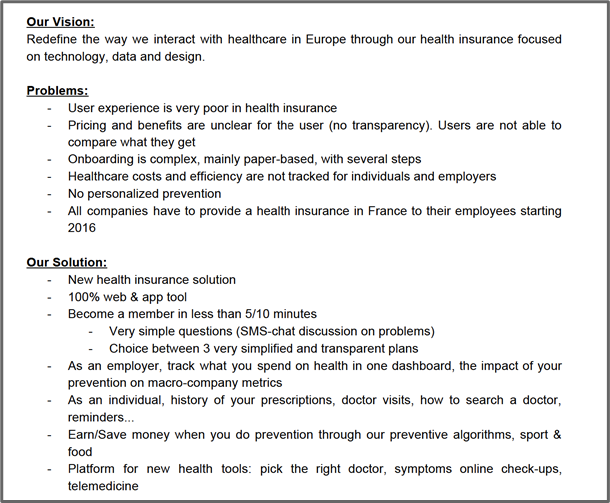 This is rather self-explanatory and visionary (this was February 2016 but every. single. word. still stands today).
Why did we invest?
Because there was something prophetic about the vision of JC and Charles, something absurdly clear and surgically precise (pun intended) in how Alan was going to be built and successful.
From then on, we began to see what could go right and not what could go wrong.
The upside was gigantic and there was no competing startup in Europe.
And so we decided in 48 hours to invest in their €2.5M pre-seed round along with an incredible group of high-profile Angels.
A few kitchen table meetings later, with awesome fellow Board Members Guillaume Sarkozy and Paul Desmarais III, Alan closed their €9M Seed Round in summer 2016 (with our friends from Open CNP – the Insurer’s VC arm) right before receiving the first Insurance license ever granted by the French Regulator since 1986 (!!!).
Alan went live in October 2016 and aggressively grew in 2017, starting to make a name for itself in the ecosystem.
From there on, Alan has attracted top tier VCs almost every year:
- €23M Series A led by Index in April 2018
- €40M Series B led by DST in December 2018
- €50M Series C led by Temasek in February 2020
- €185M Series D led by Coatue in April 2021
- Can’t wait for 2022 ☺
Why are we so excited about the future? Alan has barely scratched the surface.
I have witnessed first-hand the last 5 years of incredibly relentless execution, weekly update after weekly update, not only exactly as planned in their foundational document, but also creating an outstanding organization and culture along the way.
Jean-Charles has grown into an inspirational leader, not only for his peers, but also for us investors.
The culture of Alan is truly outstanding, an improbable mix of full transparency (including full disclosure of salaries and stock-options), remote work habits, asynchronous collaboration with no meetings, absence of hierarchy but rather peer coaching mechanisms, constant feedback loops with an authentic subsidiarity and ownership in everyone’s job. Alan is fundamentally based on trust and empathy, where failure is an option as long as Alaners learn, persevere and never give up solving problems that life (insurance) is throwing at them.
There are now 350 Alaners and the bar is so high, it has become harder and harder to get to work for Alan (almost as hard as it was to get in as a VC in their pre-seed round ☺). And having witnessed the quality of the people joining the company, it is truly exceptional to see how one Alaner after the other is raising the average level of the company.
With now more than 150,000 customers, the company is on its way to profoundly transform the Healthcare market in Europe.
Insurance is just a start. It’s a Trojan Horse. It’s not about helping people find better doctors, get reimbursed faster, all with a fully digitized, real-time process, and with awesome customer support. It’s about helping people stay healthier, for longer, in the first place. And the roadmap ahead to get there is mind-boggling.
Incumbent Health Insurance companies went from denial to sheer fear, not unlike what happened between Hotel Chains and Airbnb in the last decade. People start to realize the great rebundling that is taking place and how tech is transforming the industry.
Alan is now at €100M in signed annual contracts and more than doubling every year. To perfectly align the planets, the market has just been deregulated as of December 1st of 2020      and clients are no longer locked for 12 months but can cancel existing contracts at any time, hence converting new clients will only be easier and growth will continue to accelerate. It is now becoming public knowledge that a significant portion of the largest French Insurers’ churn is already due to customers joining Alan.
And beyond France, Alan is now live in Spain and Belgium, where it sees tremendous upside.
Alan has eyes on the horizon, aiming at sustainably transforming the healthcare system, and it is making the right investments to get there. Beyond an incredible user experience, Alan has started to redefine what health insurance means by offering meditation, telemedicine, personalized recommendations, and even reminders of annual doctor visits for all family members. Why would an Insurer push clients to consume more healthcare at the expense of its short-term profitability? Because in the long term, clients get healthier. And everybody wins.
That’s what a truly sustainable impact on society means.
We can’t wait to see what Alan will become in the next decade. This is a truly legendary company in the making, one that will leave its imprint on an entire industry across Europe. It is a privilege to be part of this journey and to get to work alongside Jean-Charles and Charles, a source of great pride and learnings, but more importantly a life lesson.
Hats off Alaners!
***
To learn more, read the Press Release here.
< Back to News