Why we invested in Memfault, the first end-to-end observability platform for connected devices 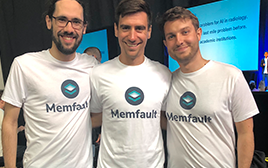 Memfault's co-founders
Connected devices have become a ubiquitous fixture in our everyday lives. There are approximately 20 billion of them out there, two thirds of which are consumer-facing (1) and the rest found in industrial settings, with smart cities, manufacturing, logistics and connected buildings among the top categories (2). And with a CAGR over 10% (3) , IoT, already prevalent, is poised to become inescapable.
And whether it’s at home, at work, or in transit we expect and often rely on these devices to just work. Easier said than done: most of us have experienced that dreaded moment when one of our connected devices – on average 5 per person in the US, expected to grow to 10 over the next few years – ends up bricked. Last month, my speakers remained stubbornly silent for a couple of weeks after a seemingly innocuous firmware upgrade: a very minor annoyance in my case, but consequences can be catastrophic when failures affect life-critical or safety systems in transportation infrastructure, medical equipment, etc.
This is where Memfault comes in.
The company’s tools allow embedded and firmware developers to monitor the performance of individual devices as well as entire fleets, and investigate any issues in depth, all in real-time.
Historically, such fine-grained tracking and diagnostics capabilities were available only to application developers, due to the traditionally severely constrained compute, battery and network characteristics of embedded environments.
And while devices have recently gotten markedly more powerful, the tooling and associated practices available to most embedded software teams haven’t kept up: industry estimates are that firmware engineers spend 40% to 60% of their time debugging elusive and vexing issues, often flying blind with no access to logs, with little to no ability to query the status of appliances in the wild.
Memfault’s customers, instead, get to leverage the product to detect, hunt down and fix in a few hours – and often before upgrades are even released to a broad audience – issues that would have otherwise taken them months to track down, saving engineers hundreds, and perhaps more critically, avoiding the possibly extreme consequences of faulty code rolling out to production – invaluable to both manufacturers and their customers.
"Capturing and interpreting useful crash logs is hard. It would take months and significant engineering resources to implement the tooling necessary to get equivalent functionality to what Memfault offers”, testified Alvaro Prieto, Principal Embedded Software Engineer at Sofar Ocean. “Being able to upload coredumps after running a device in the field without a debugger and getting a very detailed summary of all crashes is incredibly useful and has shortened our debugging process time enormously."
We believe the Memfault team is exceptionally well-suited to take this on, given the collective years of scar tissue and experience building firmware, enduring lackluster tooling, and eventually coming up with early attempts to address that pain.  All three founders -- François Baldassari, Chris Coleman and Tyler Hoffman -- previously worked at hardware companies (Pebble, Oculus and Fitbit) where they vividly felt the need for such a tool.
And I grew evermore confident in the potential for Memfault to usher in that paradigm shift, that long overdue modernization of embedded engineers’ workflows, after I reached out to several hardware companies in our network to assess their need, and consistently received, instead of mere feedback, pleas to meet the Memfault team!
I also felt that both my teammate Réza and I could be valuable partners to the founders: as a longtime CTO, I have an almost visceral reaction to the pain Memfault solves for engineers, and Reza’s career spent marketing infrastructure to the enterprise gives us a leg up connecting with the developer community. Finally, Partech’s deep network of corporate partners includes multiple equipment manufacturers eager to test out every new feature Memfault rolls out!
We are so delighted to welcome Memfault to the Partech family in this $8.5 million Series A, led by Partech with participation from existing investor Uncork.
Discover more about Memfault on their website.
(1) Source: Statista: ‘’The IoT installed base in the consumer sector is forecast to amount to 13.5 billion by 2020 ‘’ https://www.statista.com/statistics/370350/internet-of-things-installed-base-by-category/
(2) Source : IoT Analytics : https://iot-analytics.com/top-10-iot-segments-2018-real-iot-projects/
(3) Source : Valuate Reports : https://www.prnewswire.com/news-releases/iot-in-manufacturing--market-size-is-projected-to-reach-usd-1038-8-million-by-2026-at-cagr-10-6--valuates-reports-301212636.html
< Back to News